U.N. envoy says his proposal on Kosovo is a "compromise"

U.N. envoy Martti Ahtisaari's proposal putting Kosovo on a tentative path toward eventual statehood is a "compromise" between the province's rival Serbs and ethnic Albanians, he said Friday. 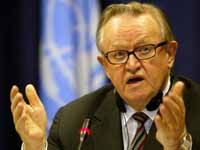 U.N. envoy says his proposal on Kosovo is a "compromise"

The plan formally presented to Serbian President Boris Tadic is "a result of one year of intensive negotiations with the parties," the former Finnish president said before leaving to detail the plan to Kosovo's ethnic Albanian leadership.

"It is a compromise proposal," he said, adding that further consultations between the parties could be held later this month and that the current version "is a draft and not a final proposal."

"I'm willing to integrate compromise solutions that parties might reach, and I will then finalize my settlement proposal for submission to the U.N. Security Council," Ahtisaari said, specifying that he would invite the rival sides to meet on Feb. 13, reports AP.

He added that in their meeting, Tadic repeated Serbia's "well-known" stand on Kosovo. Serbian officials have repeatedly said they would never accept an independent Kosovo.