Abbas to meet with Hamas leader in Saudi Arabia

Palestinian President Mahmoud Abbas will meet with Hamas' top leader in Saudi Arabia next week in another effort to negotiate a national unity government agreement, an aide to Abbas said Friday. 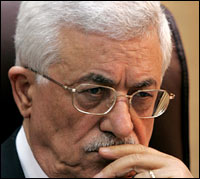 Abbas to meet with Hamas leader in Saudi Arabia

The meeting between Abbas and Hamas supreme leader Khaled Mashaal was to take place Tuesday, the official said. The two leaders met in Syria last month, but failed to reach agreement on forming a government.

The official spoke on condition of anonymity because the meeting had not been officially announced.

The decision to meet came as Fatah and Hamas gunmen battled in the streets of Gaza in a new wave of factional violence.

Hamas and Abbas' Fatah movement have been at loggerheads since Hamas won parliamentary elections last year and formed a Cabinet, splitting power in the Palestinian government, reports AP.

The United States, Israel and the European Union, which list Hamas as a terror group, launched an economic boycott of the Palestinian Authority after Hamas' victory, demanding the group renounce violence and recognize Israel's right to exist.

Abbas hopes that a unity government with a moderate agenda will alleviate the sanctions, but several previous efforts at striking a coalition agreement with Hamas have foundered.