One of the world's largest geostationary satellites has developed a glitch in one of its experimental telecommunications systems, authorities said Friday. 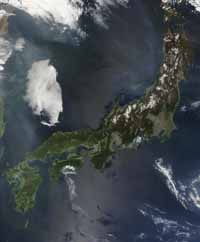 Launched in December, the Japanese research satellite Kiku No. 8 is designed to be a platform for testing various telecommunications systems and other experiments.

Geostationary satellites orbit the Earth by staying over a fixed point, usually to provide telecommunications services to a particular area.

Earlier this week, however, one of the experimental telecommunications systems apparently developed a problem when officials tried to power it up, the National Institute of Information and Communications Technology said in a statement Friday.

NICT, which is responsible for the experiment, said it was working with Japan's space agency to determine why the problem occurred and how to remedy it.

It was not immediately clear what impact the problem could have on the satellite's mission, reports AP.

NICT officials could not immediately be reached for further comment.

The satellite experienced difficulties deploying one of its two antennas a week after launch.

The Japan Aerospace Exploration Agency, NICT and Nippon Telegraph and Telephone Corp., which also collaborated in the satellite's development, have been running tests on its equipment since early January, according to JAXA. Experiments are slated to start in April.