German Chancellor Angela Merkel said Tuesday that she would try to block any European Commission attempt to impose a general emission reduction on the auto sector and will oppose including the car industry in the CO2 trading program. 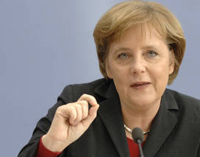 "The German government will advocate for a sectoral reduction with all its power and energy," Merkel said at a conference on Europe organized by German business groups. "And I think I can go so far as to say that we will prevent a general reduction. At any rate, I will do what ever I can to prevent this."

The European Commission on Monday delayed a decision on whether to impose binding rules on automakers to limit carbon dioxide emissions from new cars amid industry concern that such rules could lead to significant profit losses.

Elsewhere, Environment Minister Sigmar Gabriel urged German automakers to push ahead with developing low-emission autos, saying that they needed to be sure they were not beaten out by offerings from China or Japan, reports AP.

"Climate protection is also the task of the auto industry," he told the Bayerischen Rundfunk newspaper.