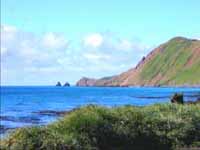 The quake struck west of Macquarie Island at 2:54 p.m. local time (0454GMT), and was centered 10 kilometers (6 miles) below the seabed. The U.S. Geological Survey originally recorded the temblor as a 6.3 magnitude, but later upgraded the quake to 6.7.

Stuart Koyanagi, a geophysicist at the Pacific Tsunami Warning Center at Ewa Beach, Hawaii, said the quake was unlikely to generate a major Pacific-wide tsunami.

"Normally at this magnitude we don't expect any kind of destructive tsunami," he said.

Clive Collins, a seismologist at Geoscience Australia, said the Macquarie Island earthquake involved two tectonic plates moving against each other horizontally, rather than vertically, and was unlikely to displace the large quantity of water needed to generate a tsunami, reports AP.

"It's most unlikely there would be any tsunami," he said. "It's a fairly large earthquake and it's fairly shallow, but we don't think there's any risk."

The isolated, sparsely populated island lies around 1,343 kilometers (835 miles) south of the island state of Tasmania, and serves as a base for Australian expeditions to Antarctica.