Chavez accuses Venezuelan telecom of spying on him at bidding of U.S.

Venezuelan President Hugo Chavez on Friday accused his nation's main telecommunications company of spying on him, apparently at the bidding of the United States. 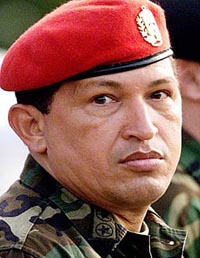 Chavez accuses Venezuelan telecom of spying on him at bidding of U.S.

Though Chavez referred to "North American capital" as being responsible for using the company to spy, he did not mention the United States by name. But Chavez frequently uses the term "empire" to refer to the U.S. government.

Chavez has had tense relations with the United States since he became president eight years ago, and frequently accuses U.S. President George W. Bush of trying to overthrow him, claims that are fiercely denied by American officials, reports AP.

U.S. Embassy spokesman Brian Penn declined to comment on the accusation about CANTV.