The top American commander in Iraq, U.S. Gen. George Casey, said Friday that some of the extra troops that U.S. President George W. Bush ordered to Baghdad could begin leaving by late summer if conditions allow. 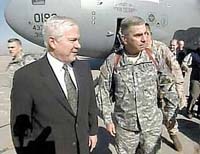 "I think it's probably going to be the summer, late summer, before you get to the point where people in Baghdad feel safe in their neighborhoods," Casey told reporters at a news conference with visiting U.S. Defense Secretary Robert Gates.

Asked how long the 21,500 extra U.S. troops are likely to be kept in Iraq, Casey replied, "I believe the projections are, late summer."

The first group of extra troops a brigade of the 82nd Airborne Division has just arrived in Baghdad, and Gates said it was too early to predict how Bush's plan for quelling the sectarian violence in the capital will work.

Four other brigades are to be sent to Iraq between now and May, assuming the Iraqis follow through on their commitment to bring three additional Iraqi army brigades into Baghdad and to allow raids against all illegal militias.

Asked how the Iraqi government was doing to meet its commitments, Casey said, "So far, so good."

Casey stressed that it was too early to say with confidence how long the U.S. military will have to maintain a higher troop level in Baghdad and western Anbar province. But he sounded an optimistic note.

"You're going to see some progress gradually over the next 60 to 90 days," he said.

Casey is being replaced soon by Lt. Gen. David Petraeus, although the timing is uncertain. Casey has been nominated to become the next chief of staff of the Army, but he has not yet been confirmed in that job by the Senate.

"It will be late summer before we see the results that would cause us to make some decisions like that," Casey added, referring to the prospect of reducing the overall size of the American force, which stood at 132,000 troops at the time Bush announced he was sending reinforcements.

The troop buildup is scheduled to unfold in phases, with the full contingent of five extra brigades not in place until May.

Gates' visit to Iraq his second since replacing Defense Secretary Donald H. Rumsfeld was not announced in advance. He immediately went into talks with U.S. commanders and their allied counterparts amid the burgeoning war policy debate in the United States.

Britain, which has the largest troop contingent among the U.S. allies, with about 7,000 soldiers in the Basra area, is planning to withdraw a large portion of them this year.

Gates said at the outset of his weeklong overseas trip that he realized the security situation in southern Iraq is different than in Baghdad, where the United States is building up its troop strength.

From Basra, Gates and Casey took a cargo plane to the Tallil air base near the ancient city of Ur and about 10 miles from the southern city of Nasiriyah. They met there with commanders from several coalition countries, including Australia, Poland, Romania and Denmark.