Bulgarian President Georgi Parvanov was sworn in Friday for a second term, pledging that the EU newcomer nation will remain a loyal partner to the bloc and NATO. 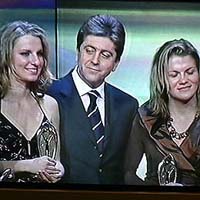 Parvanov swore to uphold the constitution and kissed the Bible in a solemn parliamentary session that traditionally precedes the inaugural ceremony.

The presidency in Bulgaria is a largely ceremonial position, with the real power held by the prime minister and parliament. Still, the president carries moral authority and legislative veto power.

Parvanov, a 49-year-old historian and former leader of the Socialist Party, won a landslide victory over ultra-nationalist leader Volen Siderov in November's presidential elections and became the first Bulgarian president to win re-election since the fall of communism in 1989.

He also presided over Bulgaria's EU entry on Jan. 1, which he said marked "a new period of Bulgaria's development."

"The membership in the EU and NATO commits Bulgaria to new responsibilities to the countries of the region," Parvanov told parliament, adding that Bulgaria will support the efforts of its Balkan neighbors to also join the EU.

Parvanov criticized the war in Iraq, but insisted that Bulgaria would not waver in its commitments to the U.S.-led coalition there.

"If I were to follow my wishes, there would not be a single Bulgarian soldier sent abroad," Parvanov said. "Any withdrawal, however, will bring about heavy consequences for the democratic community, including us."

Bulgaria has sent a 120-strong non-combat unit in Iraq, and has been part of the multinational forces there since August 2003, reports AP.

Parvanov also called for the release of five Bulgarian nurses and a Palestinian doctor sentenced to death in Libya on charges of intentionally infecting children with HIV. The six were convicted a month ago despite scientific evidence that the children got the virus before they were hired to work there.