The Australian government joined the United States and Japan on Friday in demanding an explanation from Beijing over a weapons test in which a weather satellite was destroyed by a missile. 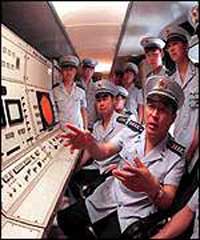 The United States said China conducted the test earlier this month in which an old Chinese weather satellite was destroyed by a "kinetic kill vehicle" launched from a ballistic missile.

Foreign Minister Alexander Downer, who was in New York, said Australia opposed the test and had called upon Beijing's ambassador to Australia, Madame Fu Ying, for an explanation, reports AP.

"Our concern about this is that to have a capacity to shoot down satellites in outer space is not consistent with ... the traditional Chinese position of opposition to the militarization of outer space," he told reporters. "So we've asked the Chinese for an explanation as to what this may mean."

"So far, the answer from the foreign affairs people in China including the ambassador in Canberra is that they're not aware of the incident," he added.

Downer said Australia was also concerned about what effect debris from the destroyed satellite might have on other satellites in the area. Analysts in the United States have said China's weather satellites would travel at about the same altitude as U.S. spy satellites, so the test represented an indirect threat.

Officials in the United States and Japan have asked China to explain the test.