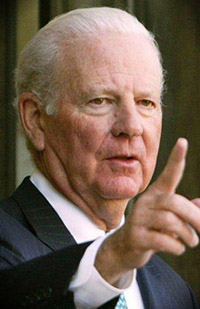 The panel, in a statement summarizing its 300-plus page report on BP's operations, said the company had made strides in personal accident prevention but came up short on the bigger picture.

"The panel maintains a central theme that prior to the Texas City tragedy BP emphasized personal safety and had achieved significant improvements in personal injury rates, but the company did not emphasize process safety," the statement said. "BP mistakenly interpreted improving personal injury rates as an indication of acceptable process safety performance at its U.S. refineries."

The 11-member panel made 10 recommendations, including that an independent monitor report to the company's board of directors for a period of five years. The full report was to be released later Tuesday.

Baker has led the panel investigating corporate management at Houston-based BP Products North America following the March 2005 blast that killed 15 people and injured more than 170 others.

The U.S. Chemical Safety and Hazard Investigation Board, known as the CSB, urged BP in August 2005 to hire outside experts to look at the company's oversight of safety management systems and make its findings public similar to an investigation at NASA following the space shuttle Columbia tragedy.

The panel, announced in October 2005, has traveled to BP's five U.S. refineries and interviewed hundreds of employees.

"BP tended to have a short-term focus in its U.S. refining operations, and its decentralized management system and entrepreneurial culture delegated substantial discretion to U.S. refinery plant managers without clearly defining process safety expectations, responsibilities or accountabilities," the panel said in the report.

Baker, a senior partner at the Houston-based Baker Botts law firm, was White House chief of staff and treasury secretary in the Reagan administration and secretary of state in the first Bush administration. The release of the BP report was twice delayed because of his work with the Iraq Study Group, which made its recommendations to President Bush last month on how to revamp U.S. policy in Iraq.

The release of the report comes less than a week after London-based BP said Chief Executive John Browne would step down by the end of July, more than a year ahead of schedule.

BP said Friday that Browne, 58, will be succeeded by Tony Hayward, the head of exploration and production, who will assume the task of trying to repair the company's reputation with the public and investors. Problems stem from a series of well-publicized mishaps that include the Texas explosion and last year's giant oil spill in Alaska, reports AP.

The 2005 explosion has so far cost the company around $2 billion (Ђ1.54 billion) in compensation payouts, repairs and lost profits. BP has settled hundreds of lawsuits related to the accident, putting aside $1.6 billion (Ђ1.24 billion) just to resolve legal disputes.

Based on its investigation, the CSB has criticized BP for its safety systems at Texas City, about 40 miles southeast of Houston, finding the company fostered bad management at the plant and failed to fix problems.