Ukraine's government will ask parliament to toughen fines for sneaking food, building materials and other items out of the irradiated zone surrounding the Chernobyl nuclear power plant, an emergency official said Tuesday. 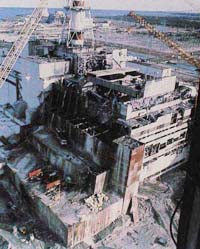 Ukraine continues to enforce a 50-kilometer (30-mile) exclusion zone around the plant, where reactor No. 4 exploded in 1986 in the world's worst nuclear accident. The zone is patrolled by Ukraine's Emergency Situations Ministry, and special permission is needed to enter.

But Emergency Situations Ministry Nestor Shufrych said his ministry, in response to public concerns, decided to increase fines, in some cases tripling them, for citizens and officials caught illegally spiriting items out of the zone.

The changes must still be approved by parliament.

Fears run high in Ukraine and Russia that items from the Chernobyl region where the evacuated were forced to abandon household belongings and contaminated wild foods such as berries and mushrooms are being secretly sold to unsuspecting buyers, reports AP.

This past holiday season, rumors flew through Kiev that some New Year's trees on sale were culled from the forests around the plant. Officials denied the rumors.

"No one has the right to be making a living out of the Chernobyl zone," Shufrych was quoted as saying by the Interfax news agency.