Iraqi Vice President Tariq al-Hashemi said Monday he should have been consulted ahead of time about the execution of two top aides to Saddam Hussein since he and the two other members of Iraq's presidential council had asked for it to be delayed. 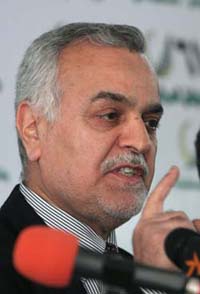 "We have not been consulted, and I was caught by surprise because the presidential council had made an appeal to postpone this execution. But nevertheless this execution was effected by the government without any pre-consultation with us," al-Hashemi said on British television.

He told Channel 4 News that he did not want to defend the two executed men, but he criticized the way their trial and executions were carried out.

The two aides Saddam's half brother Barzan Ibrahim, a former intelligence chief, and Awad Hamed al-Bandar, head of Iraq's Revolutionary Court were executed in Baghdad before dawn on Monday. Ibrahim's head was severed from his body during the execution, a government official said.

Ibrahim and al-Bandar had been found guilty along with Saddam in the killing of 148 Shiite Muslims after a 1982 assassination attempt on the former Iraqi leader in the town of Dujail, north of Baghdad.

Al-Hashemi, President Jalal Talabani and Vice President Adil Abdul-Mahdi make up Iraq's presidential council, and all three must sign death warrants before executions can be carried out, reports AP.

But Prime Minister Nouri al-Maliki's government said that the law under which Ibrahim and al-Bandar were sentenced, and the fact that it was upheld by the appellate court, required no further action by the presidential council.

As general secretary of the Iraqi Islamic Party, al-Hashemi is the most senior Sunni Arab member of the Iraqi government, which is dominated by majority Shiites, including the prime minister. Al-Hashemi often has spoken out about the threat posed in Iraq by Shiite militias.

During his visit to Britain, al-Hashemi met with Prime Minister Tony Blair at 10 Downing St. on Monday.

Al-Hashemi said he did not discuss the executions with Blair, but that he had received "an encouraging undertaking" from the prime minister about the continued presence of British troops in Iraq.

The hasty withdrawal of British troops would "create a serious security vacuum" that could be exploited by insurgents fighting in Iraq, al-Hashemi said.

"We don't have at this moment the national and reliable and competent national forces to fill this gap," he said. "The country might slide into chaos and into civil war, and this would damage not only the security of Iraq, but the reputation of America and Britain."

Blair's government has made it clear that the recent U.S. pledge to send more than 20,000 additional combat troops to Iraq won't change Britain's plans to eventually pull all its 7,000 forces out of the country.

Britain, America's top ally in the war, has cautiously endorsed U.S. President George W. Bush's plan, but said it won't match the U.S. commitment by sending any new troops of its own.

In fact, British forces have withdrawn from two of the four provinces they once occupied in southern Iraq, and Blair's government is expected to withdraw about 3,000 more troops by this spring.