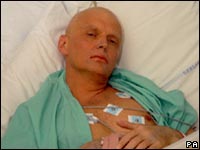 Prosecutor General Yuri Chaika also was quoted by news agencies as saying that Russian investigators would be traveling to Britain soon and would seek to question businessman Boris Berezovsky, a billionaire Kremlin critic who has asylum in Britain and who has long been wanted by Russia prosecutors.

Scotland Yard agents last traveled to Russia in December, as part of their investigation into the murder of Litvinenko, a Russian ex-security agent who died of radiation exposure in a London hospital in November. However, they were not allowed to question anyone directly, instead sitting in while Russian authorities conducted the interviews.

"Literally yesterday a new international investigative request from Great Britain arrived containing a request seeking permission for a group of British investigators probing the Litvinenko case to come to Moscow," Chaika was quoted by Interfax as saying.

"I don't rule out that that after our representatives' trip to London, we will again receive our colleagues here" in Moscow, he was quoted by ITAR-Tass as saying.

In London, Scotland Yard said there were no definite plans for detectives to return to Russia as part of the inquiry into Litvinenko's death, but that it remained an option.

A British police official, speaking on condition of anonymity as they were not authorized to discuss the inquiry, said there were no current scheduled plans for officers to return to make inquiries in Russia.

"It's not something we're prepared to discuss at the moment. We don't discuss our travel plans," a police spokeswoman said on condition of anonymity in line with government policy.

Litvinenko died in a London hospital Nov. 23, several weeks after ingesting the rare radioactive isotope polonium-210. In a deathbed statement, he blamed President Vladimir Putin for his poisoning. The Kremlin has denied the allegation.

Russia has also begun its own investigation, seen as a bid to keep control of the case, which has threatened to drive relations between Britain and Russia to post-Cold War lows.

Chaika also indicated that Russian investigators traveling to Britain would seek to question Russians living abroad as part of their probe. In an interview broadcast Sunday, he said that Moscow has asked Britain for permission to interview more than 100 people.

"As far as the actual Litvinenko case is concerned, we also are interested in uncovering this crime in as much as, firstly, he was a Russian citizen, and secondly, we have our theory on the murder," Chaika was quoted by ITAR-Tass as saying. "We don't rule out that the murder may have been committed by Russian citizens who live abroad."

Chaika singled out Berezovsky as one person Russian investigators would be seeking to question when they travel to London.

"We intend to question him only about the Litvinenko case," RIA-Novosti quoted him as saying.

Litvinenko fell ill at the beginning of November after meeting at a bar at the Millennium Hotel in London with three Russian businessmen, including ex-security agent Andrei Lugovoi. All three men have denied involvement in the former agent's death, reports AP.

Pro-government Russian lawmakers have also suggested Berezovsky could have been behind the death of Litvinenko as part of a plan to blacken the reputation of the Kremlin.