Turkmenistan's top legislative body is to meet Tuesday to set a date and candidates for presidential elections to replace the late Sapurmurat Niyazov, who ran the country with an all-encompassing personality cult. 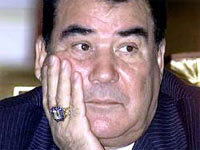 Niyazov died last week without leaving an apparent preferred successor. The country also has no election law laying down details of how voting is to be conducted.

Acting president Gurbungali Berdymukhamedov said last week that the presidential election would be held "on a democratic basis that has been laid by the great leader" - seen as an indication that Turkmenistan does not plan a pluralistic election, the AP reports.

Turkmenistan has only one legal political party - the Turkmenistan Democratic Party - and opposition is tightly suppressed. Opposition leaders living abroad have said they intend to return to Turkmenistan in the wake of Niyazov's death, but have not succeeded.

Under the constitution, the People's Council - which consists of 2,500 deputies, some of whom were elected and others appointed - is to set an election date within two months of the president's death. However, the body also has the authority to change the constitution.

Questions about how closely the constitutional procedures would be followed arose within hours of the announcement of Niyazov's death. The constitution says the speaker of parliament was to become acting president, but the role was taken by Berdymukhamedov, the deputy prime minister, and a criminal case was opened against the parliament speaker.

His unexpected rise to the acting president post sparked speculation of an internal power struggle and that elections could be postponed until autumn.

Stability in Turkmenistan is of strong interest to both the West and Russia. Turkmenistan has enormous natural gas reserves and occupies a geographically strategic position, bordering both Afghanistan and Iran.