On what was scheduled to be their last full day in space, crew members aboard space shuttle Discovery woke up Thursday to the strains of "The Road Less Traveled." 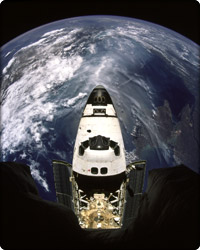 "It's great to hear some good jazz from Houston's own incomparable Joe Sample. He'll help us ease into the last few days of this mission," astronaut Joan Higginbotham radioed to Mission Control.

NASA managers in Houston, meanwhile, faced a series of complicated trade-offs about where to land the spacecraft. They may have to decide among three imperfect choices as they try to select a landing site.

The forecast calls for low clouds and showers at Kennedy Space Center, where Discovery is slated to land Friday.

Crosswinds are expected at the primary back-up landing site at Edwards Air Force Base in California. The weather looks good at another back-up site in New Mexico, but it is rarely used and lacks equipment, meaning a landing there would give NASA logistical headaches.

"More than likely, we will evaluate the conditions on a case-by-case basis on Friday and pick the lesser of evils," said Phil Engelauf, chief of the flight directors' office, reports AP.

On Thursday, engineers were expected to give a green light for Discovery to come home after studying images Discovery's crew took of the shuttle on Wednesday to make sure there was no damage to its heat shield.

NASA wants the shuttle on the ground no later than Saturday because the fuel that generates electricity on the spacecraft will run out. The space agency has seven chances to land the shuttle on Friday and Saturday at any of the three sites.