President Saparmurat Niyazov, who controlled vast energy reserves and lent support to Washington's war on terror, was a deeply eccentric dictator who fostered a personality cult that included making his countrymen call him "Turkmenbashi" - The Father Of All Turkmen. 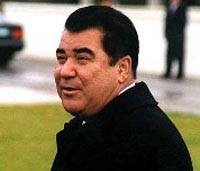 He died Thursday at age 66 after two decades in power, leaving behind a power vacuum that could destabilize a volatile and strategic region of significant interest to Russia, Europe, China and the United States.

Niyazov was courted by the Bush administration because his arid land sits on enormous natural gas reserves and neighbors Afghanistan, a key front in the war on terror - and he helped Washington by allowing coalition planes to use Turkmen airspace.

But he was no democrat, declaring himself "president for life," brutally crushing dissent and cultivating a bizarre personality cult under which he renamed the month of January after himself and April after his mother.

Among Niyazov's decrees were bans on lip-synching, car radios and the playing of recorded music at weddings. He once ordered doctors to stop taking the Hippocratic Oath and swear allegiance to him instead.

A terse report from state television said Niyazov died early Thursday of heart failure and showed a black-framed portrait of the leader. An announcer in a dark suit read a list of Niyazov's accomplishments.

The funeral is to be held Sunday in his hometown of Kipchak, where Niyazov built Central Asia's largest mosque, called "Spirit of Turkmenbashi," at a reported cost of more than US$100 million.

"An order is an order. Turkmenbashi has died," said one shop owner as he closed his doors.

Pedestrians appeared quiet and stunned. Most refused to comment to a reporter, an apparent reflection of the country's stifling of opinion and independent media.

Vagif, a student who only gave his first name, said students and teachers at his Turkmen-Turkish university cried when they heard about the death.

"What a sorrow has fallen on the Turkmen people," said one woman, who declined to give her name.

The council said the Prosecutor General's office has opened a criminal investigation against Atayev, making him ineligible to fill in as president. The move could herald a battle for succession between rival groups in the Turkmen administration.

Berdymukhamedov also has taken charge of the funeral arrangements, it said.

In Moscow, Russian Foreign Minister Sergey Lavrov voiced hope that the transfer of power would take place in a lawful way and the two nations would maintain their relations. Russia is the sole transit route for Turkmenistan's vast gas resources, and it would be interested in preserving the status quo.

The security council declared a seven-day national mourning period, calling on the country's people to show "firmness and strength" and "unite for the sake of our homeland's peace and prosperity."

Niyazov underwent major heart surgery in Germany in 1997 and last month publicly acknowledged for the first time that he had heart disease. But he did not seem seriously ill; two weeks ago he appeared in public to formally open an amusement park named after him outside the capital.

Niyazov had led the desert nation since 1985, when it was still a Soviet republic. After the 1991 Soviet collapse, he retained control and began creating an elaborate personality cult and turning Turkmenistan into one of the most oppressive of the ex-Soviet states.

Statues of him were erected throughout the nation. He is listed as the author of the "Rukhnama" (Book of the Soul) that was required reading in schools, where children pledged allegiance to him every morning, the AP reports.

Earlier this year, the eccentric leader announced he would provide citizens with natural gas and power free of charge through 2030. But he has also tapped the country's vast energy wealth for outlandish projects - a huge, man-made lake in the Kara Kum desert, a vast cypress forest to change the desert climate, an ice palace outside the capital, a ski resort and a 40-meter (130-foot) pyramid.

He crushed opposition and drew condemnation from human rights groups and Western governments.

"His death means a terrible shock for the republic, its residents and the political class. It's comparable to a shock the Soviet Union felt after Stalin's death," Vyacheslav Nikonov, head of the Moscow-based Politika think tank, was quoted as saying by the RIA-Novosti news agency.

The agency also quoted Khudaiberdy Orazov, a leader of Turkmenistan's hard-pressed opposition, as saying he and other opposition leaders will meet soon to discuss how to proceed.

In 2002, an alleged assassination attempt sparked a severe crackdown, leading to dozens of arrests that were criticized. A former foreign minister, Boris Shikhmuradov, was named as the mastermind of the alleged plot and sentenced to life in prison after a Stalinist-style show trial broadcast on TV that included a taped confession in which he said he was a drug addict and hired mercenaries for the attack while living in Russia.

Turkmenistan - a majority Muslim country dominated by the vast Kara Kum desert - has the world's fifth-largest natural gas reserves, but Niyazov failed to convert that wealth into prosperity for his country's 5 million people.

Niyazov was born Feb. 19, 1940. His father died in World War II and the rest of his family was killed in an earthquake that leveled Ashgabat in 1948. He was raised in an orphanage and later in the home of distant relatives.

Niyazov attended Leningrad Polytechnic Institute in Russia to study power engineering and worked at the Bezmeinskaya Power Station near Ashgabat after his graduation in 1966.

Named head of the Communist Party in Turkmenistan in 1985, Niyazov was named president of the Turkmen Soviet Socialist Republic in October 1990 and led his nation through its independence on Oct. 27, 1991. He was elected president of the new independent Turkmenistan in 1992 with a reported 99.5 percent of the vote. In 1994, a reported 99.9 percent of voters supported a referendum allowing him to remain in office for a second five-year term without new elections.

In 1999, he was effectively made president for life after parliament removed all term limits, but an August 2002 gathering of the country's People's Council - a hand-picked assembly of Niyazov loyalists - nonetheless went further and endorsed him as president for life.

Under his rule, Turkmenistan adopted a strict policy of neutrality and spurned joining regional security or economic organizations that sprung up in the wake of the Soviet collapse. But he also supported the U.S.-led military operations in neighboring Afghanistan.

Niyazov also pursued strong nationalistic policies to encourage the use of the Turkmen language over Russian and banned access to Russian-language media, leading to an increased exodus of some of the country's most educated citizens and decimating its school system.

Secondary education in the country has been reduced to a required nine years, causing human rights groups to complain of a deliberate attempt to dumb down the population to prevent dissent.