An appeals court on Thursday upheld a British judge's decision that a newspaper violated the privacy and copyright of Prince Charles by publishing excerpts from his diaries. 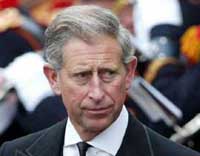 The heir to the throne had sued the publisher of the Mail on Sunday newspaper for breaches of confidentiality and copyright after it published extracts last year from a diary Charles kept during a 1997 visit to Hong Kong, in which he referred to Chinese officials as "appalling old waxworks."

Lawyers for Charles have said the diaries were copied by a former member of staff and passed onto the newspaper.

The Mail on Sunday said publication of the diaries are in the public interest because they contained the political beliefs of the man who, as king, will be Britain's head of state, reports AP.

The public should be allowed to learn what "the journal tells us about the attitude of the Prince of Wales to relations between the U.K. and China and the Prince's conduct in his role as heir to the throne," the paper's lawyer Mark Warby told an earlier hearing.

In March, Judge William Blackburne supported Charles in his bid to prevent publication of further details but said a decision over publication of seven other journals would have to go to a full trial.