Facts and figures on Turkmenistan 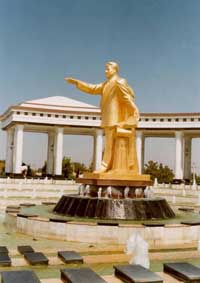 Facts and figures on Turkmenistan

GEOGRAPHY: Turkmenistan stretches from the Caspian Sea on the west to Afghanistan in the east, also bordering Iran, Uzbekistan and Kazakhstan. Its territory is largely sandy desert, with some mountains along the Iranian border. Total area about 488,000 square kilometers (195,000 square miles), roughly the size of California.

RELIGION: About 90 percent of the population is considered Muslim, primarily Sunni, although it is not clear how many are observant. The government, though secular in principle, has encouraged its official brand of Islam, while allegedly cracking down on other Muslim factions.

POLITICS: Under Niyazov, who was Turkmenistan's last Communist boss and became president after the collapse of the Soviet Union, the country experienced virtual one-man rule. Niyazov cracked down on opposition and independent media, as well as creating an extensive cult of personality that included styling himself as "The Father of All Turkmen" and naming months and the days of the week after him and his family members. Although the constitution calls for the parliament speaker to take over upon the president's death, the State Security Council instead appointed the deputy prime minister  an apparent indication of brewing political infighting.

STRATEGIC INTERESTS: Turkmenistan has enormous natural gas reserves and proven oil reserves of around 300 million barrels. Its border with Afghanistan is highly porous, raising the possibility that Islamists in that country could try to exert influence in the wake of Niyazov's death. Turkmenistan is a member of the Commonwealth of Independent States, a loose grouping former Soviet republics, but declares itself strictly neutral. It has granted overflight permission to the coalition forces in Afghanistan, reports AP.