Judges questioned France's prime minister on Thursday over any role he might have had in a suspected scheme to smear presidential hopeful Nicolas Sarkozy and other French personalities. 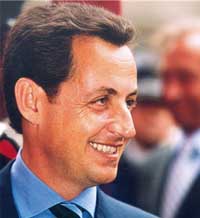 The so-called Clearstream affair has been among France's biggest political dramas of 2006, involving false allegations that Sarkozy had secret bank accounts. A veteran spy was chosen to lead an investigation into whether there was any truth to the claims.

Key questions have been what Prime Minister Dominique de Villepin knew about the accusations and when, and whether he kept the investigation going long after it became clear that Sarkozy had been unjustly accused.

The affair helped to poison relations between Sarkozy and Villepin, unsettling the center-right government in which they form an uneasy pairing, and played into the race for the French presidency in 2007.

Suspicions that Villepin was involved in the apparent machination combined with his shelving of proposed labor reforms, which provoked violent protests last spring appear to have dashed his hopes of running for president. Without saying so outright, he has recently hinted that he does not expect to be a candidate in the April and May elections.

Sarkozy, on the other hand, seen as a victim of the affair, has emerged from it strengthened in part because with Villepin seemingly sidelined he has been left as the overwhelming favorite to win the presidential nomination for the center-right UMP party, which he heads.

Villepin was expected to answer judges' questions late into the evening on Thursday while Sarkozy and other heavyweights on the right were gathering in Bordeaux for a campaign debate, reports AP.

Judges were questioning Villepin only as a witness. He has not been charged. He said earlier this week that he was looking forward to the opportunity to tell his side in a story "where many lies and slanders have been put forward and from which I have suffered over the past few years."

Villepin was expected to give testimony all day. He arrived for questioning shortly before 9 a.m., and did not speak to waiting reporters.

Sarkozy's camp again called for punishment if the investigation establishes that the apparent smear campaign was aimed at unsettling the interior minister's presidential run.

"When low blows are used to sideline a political adversary, there must be sanctions," Francois Fillon, Sarkozy's political adviser, said on the radio. He said he believed that "people manipulated this affair."