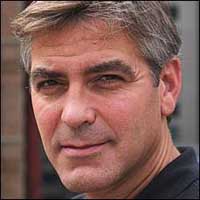 Bush presented officials with a $2 million donation Wednesday from the Bush-Clinton Katrina Fund that will pay for operating expenses once South Cameron Memorial Hospital is rebuilt next year.

Standing outside the parish courthouse, the one structure in the town to survive Rita, Bush said the storm and the community's ability to bounce back left an indelible impression.

"I know there's been a lot of tears shed over the past year," he said. "Hurricane Rita, like Hurricane Katrina, showed us the very worst in nature but they've also brought out the best in our human nature."

Clooney, who once starred on the medical drama "ER," lightened the mood.

"There is good news in all of this, which is that when the hospital gets up and running, I will not be doing any of the medical procedures," he joked.

But he also said he came to raise awareness about the ongoing hurricane recovery across the Gulf Coast, reports AP.

"I'm coming to remind people in the rest of the country that just because you're not on the front page anymore, that all the problems that have been placed here from Katrina and Rita are not solved yet," Clooney said.