The pope's Christmas tree -- the tallest to date to adorn the Vatican -- is finally in position in St. Peter's Square after bad weather and other problems delayed its arrival for over a week. 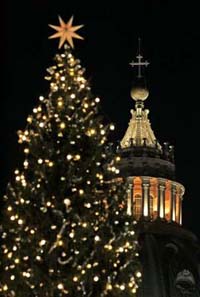 The 33-meter (109-foot) high fir tree from the mountains of Sila National Park in Calabria, southern Italy, arrived at the Vatican during the night. Thick fog encountered en route was the last of a series of delivery problems.

First workers had problems cutting down the tree because of heavy winds. Then they had to figure out how to hoist the 9-ton tree onto the helicopter which carried it on the first leg of the trip to the Vatican.

"We were on the Sila for three days," Eugenio Ripepe, supervisor of the delivery told Associated Press Television as he described the transportation difficulties.

The tradition of erecting a Christmas tree in St. Peter's Square, beside a larger than life Nativity scene, was introduced by the late Pope John Paul II in 1982.

According to Vatican statistics, the trees, which over the past 24 years have come from different European countries or regions of Italy, have never surpassed 32 meters (105 feet), making the Calabrian tree the tallest.

The tree will be decorated in the coming days, and lit on Dec. 24, Christmas Eve.