The condition of a former Russian spy who was poisoned in Britain deteriorated overnight, and he is in "very serious" condition, University College Hospital said Thursday. 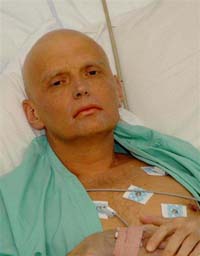 Alexander Litvinenko, 43, a former KGB agent, is suffering from the effects of an unknown poison he believes was given to him Nov. 1. His hair has fallen out, his throat is swollen and his immune and nervous systems have been damaged.

Doctors originally suspected the toxic metal thallium, but have now said it is more likely it was something else, possibly a radioactive substance.

Scotland Yard's anti terrorist branch is investigating the poisoning that friends and dissidents allege was carried out at the behest of the Russian government. Litvinenko sought asylum in Britain 2000, and has been a relentless critic of the Kremlin and the Russian security services, reports AP.

On Wednesday, the Russian Foreign Intelligence Service, the SVR, issued its strongest denial yet that it was involved in any assassination attempt. "Litvinenko is not the kind of person for whose sake we would spoil bilateral relations," SVR spokesman Sergei Ivanov said, according to the Interfax news agency. "It is absolutely not in our interests to be engaged in such activity."