The Vatican's office for health care has concluded a study on the use of condoms in the fight against AIDS, and the long-awaited report on it is now being examined by the Vatican's doctrinal watchdog, a senior cardinal said Tuesday. 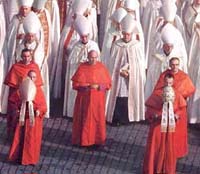 But the prelate gave no indication of the position the study takes or when a final pronouncement might be made.

Cardinal Javier Lozano Barragan, who heads the Vatican office for health care, told a news conference on infectious diseases that the document was drafted with the help of scientists, theologians and other experts.

"We have prepared a detailed study on condoms from both the scientific and moral points of view and we have passed our study on to the Congregation for the Faith," Barragan said. "Now the dossier is being studied by that office and then it will go before the pope."

Barragan said that Pope Benedict XVI is "greatly concerned" by the issue and that the dossier was prepared at his request, reports AP.

The Roman Catholic Church opposes the use of condoms as part of its overall teaching against contraception. It advocates sexual abstinence as the best way to combat the spread of HIV, the virus that causes AIDS.

But several leading churchmen have spoken out on the issue in recent years as the Vatican has come under increasing criticism for its position. Some such as a one-time papal contender, retired Milan Cardinal Carlo Maria Martini say that condoms were the "lesser evil" in combatting the spread of AIDS. Other cardinals, however, have rejected their argument an indication that the issue is still undecided at the Vatican.