A Japanese military submarine collided with a civilian vessel during exercises off southern Japan on Tuesday, officials said. 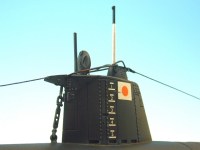 The Maritime Self-Defense Forces submarine brushed against a tanker carrying chemicals as it surfaced about 30 miles (50 kilometers) off the southeastern coast of Miyazaki, on the southern island of Kyushu, a defense agency spokesman said on condition of anonymity by protocol.

None of its crew of 16 Philippine nationals and a South Korean was hurt, but the extent of the damage was not immediately known, he said.

No injuries were reported among the 75 crew on the submarine Asashio. It apparently hit the ship's hull while surfacing, and the top part of the submarine's aft fin had been dented by the impact, the defense spokesman said.

The cause of the accident was not immediately known. The submarine had re-submerged and was expected to enter a nearby defense port for inspection, he said.

Coast Guard officials made radio contact with the Spring Auster, whose crew reported feeling a small impact. They maintained course because no other vessel was in sight, Nagasaki said.

No leakage was reported from the tanker, which would be inspected by Coast Guard officials at a nearby port, the defense spokesman said.