The departure of U.S. Defense Secretary Donald Rumsfeld cheered critics around the world who saw him as a symbol of a failed war in Iraq, while supporters of the military mission pledged to work closely with his successor. 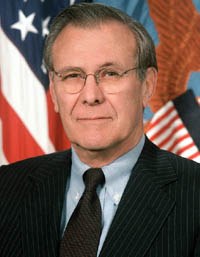 "The U.S. has to get out," declared Chandra Muzaffar, president of the International Movement for a Just World think-tank in Malaysia. "The occupation will have to end. There is no other way."

Rumsfeld resigned on Wednesday after Democrats won a narrow majority in the Senate and regained total control of Congress, dealing a powerful blow to the government of Republican President George W. Bush.

Rumsfeld was both reviled and grudgingly respected around the world for his stance on Iraq and support for controversial Bush administration policies like the detention facility at Guantanamo Bay, Cuba.

In Venezuela, President Hugo Chavez, an outspoken critic of the Bush administration, was giddy as he read aloud a news report of Rumsfeld's resignation.

"Heads are beginning to roll," Chavez said during a news conference Wednesday. "It was about time he resigned. The president should resign now."

"Since he has worked at the CIA and was a member of the National Security Council, I have heard that he is extremely well-versed in security issues," Shiozaki said.

Australia's conservative Prime Minister John Howard on Thursday reaffirmed his support for the Iraq war, and said he did not believe Washington would pull its troops out of Iraq, despite following the U.S. midterm elections.

"The strategy is not going to change," Howard told reporters in Canberra. "Although they are clearly looking for ways in which their tactics may change ... They are not going to suddenly pull out of Iraq."

Howard, a staunch Bush supporter, described the decision to replace Rumsfeld as "a gesture" to voters unhappy with the deteriorating situation in Iraq. But he said he did not believe the United States would substantially alter its position on the war.

"Clearly the president has reacted to the vote, obviously he has and that is sensible, but his reaction does not amount to a fundamental change in direction," he said.

"We are sad that he has resigned," Jawed Ludin, the chief of staff for Afghan President Hamid Karzai, told The Associated Press. "We in Afghanistan are very pleased and very grateful for (Rumsfeld's) support for Afghanistan."

Ludin added that Kabul did not expect Washington to changes its policy toward the country.

In South Korea, speculation emerged that the change in leadership at the Pentagon and in the Congress could pressure the Bush administration to back down on its refusal of one-on-one talks with North Korea over its nuclear weapons program.

Pyongyang has long demanded direct talks with Washington to discuss U.S. financial restrictions imposed for the North's alleged illegal activities like counterfeiting and money laundering. The U.S. has insisted it will talk to the North only within the framework of multilateral talks, the AP reports.

"The basic U.S. policy will change little, but in its approach, the Bush administration may come under pressure to talk directly to North Korea," said Koh Yu-hwan, a North Korea expert at Seoul's Dongguk University. "And with Rumsfeld's resignation there has to be at least some changes to its policy."