Republican Arnold Schwarzenegger claimed a second term as California Governor Tuesday with a decisive victory over Democrat Phil Angelides, capping a yearlong comeback in which he admitted mistakes, boomeranged back to the political center and spotlighted his celebrity to win appeal across the voter spectrum. 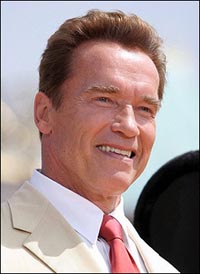 In a year when Republicans struggled nationwide, Schwarzenegger avoided the same fate by positioning himself as an "Arnold Republican" a bipartisan dealmaker with strained ties to the Bush White House. The actor-governor was also blessed with a lusterless opponent who failed to energize his own party in a state known as a Democratic stronghold.

The call for Schwarzenegger was based on a number of factors, including voter turnout, previous voting patterns and a statistical analysis of the vote from voter interviews conducted for The Associated Press by Edison Media Research and Mitofsky International.

With 3 percent of precincts reporting, unofficial returns showed the governor had about 63 percent of the vote to Angelides' 33 percent.

Schwarzenegger's victory was a demoralizing blow to state Democrats who hoped to oust the nation's best-known governor. But recent polls showed Schwarzenegger with renewed popularity across party and geographic lines, including in traditionally Democratic coastal areas, reports AP.

His victory is sure to raise his national stature and bring a fresh round of speculation about his political future. Schwarzenegger has joked about becoming president but because he is foreign-born, it would take a constitutional amendment for him to run.

"The biggest Republican winner tonight is the one guy who can't run for president in two years," said Claremont McKenna College political scientist John Pitney. "Many Republicans will hold him up as a model for how the party can come back. He's the example of how to win."

A year ago, the race was the Democrats' to lose.