Sen. Hillary Rodham Clinton readied a statewide victory tour Wednesday after romping to re-election a political milestone that bolstered her status as the Democratic front-runner for the 2008 presidential nomination. 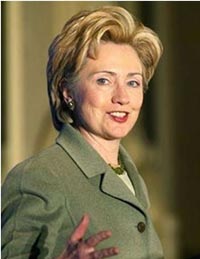 Clinton easily dispensed with her Republican challenger, former Yonkers Mayor John Spencer, winning nearly 67 percent of the vote in a lopsided contest. She planned to fly from Manhattan to stops elsewhere in the state Wednesday where she was certain to face new questions about her presidential campaign plans.

Addressing a boisterous rally Tuesday night in Manhattan, Clinton brushed aside questions about 2008 and instead championed Democratic election wins in New York and across the country.

"I want to thank you for standing up for change. The message can't be clearer: it's time for a new force," Clinton said, with her husband, former President Bill Clinton, standing at her side.

"Last week the vice president said regardless of the outcome the administration would go 'full speed ahead' in the same direction," Clinton said to a chorus of boos. "Well, I think that the American people have said 'Not so fast."'

Spencer conceded defeat about an hour after the polls closed and said he had mounted his underdog effort "to serve my nation in a time of war, a very complex time, and to serve my fellow New Yorkers."

"We didn't have the gunpowder, which was tens of millions of dollars, to back up our message," Spencer said.

It was not long ago that the Republican establishment was eager to topple Clinton or at least damage her politically before 2008. But a weakened state Republican party, coupled with Clinton's popularity and prodigious campaign bank account, scared most credible challengers away. Toward the end of the campaign, Spencer bitterly complained that national parties had abandoned his underdog candidacy.

All told, Clinton raised $40 million (Ђ31 million) for the race and had nearly $14 million (Ђ11 million) in the bank in the closing weeks of the election which could be put toward a presidential campaign.

Spencer, a conservative Vietnam War veteran, tried hard to make an issue out of Clinton's presidential prospects, insisting he was the candidate who could be counted on to represent New York in the Senate for a full six-year term. But polls showed Clinton's presumed national ambitions mattered little to most voters, reports AP.

In the Senate, Clinton has been praised as an effective advocate for the state who has been willing to forge relationships and sponsor legislation across party lines. She has also irked many anti-war activists for refusing to recant her 2002 vote authorizing military intervention in Iraq, but in recent months has harshly criticized the Bush administration's war strategy and has called for Defense Secretary Donald Rumsfeld to resign.