A key parliamentary committee on Tuesday postponed a decision on proposed legalization of same-sex partnerships. 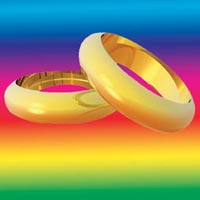 Chairman of the Home Affairs Portfolio Committee, Patrick Chauke said a vote on the legislation was expected Friday.

The committee was expected to vote on the legislation Tuesday or Wednesday after it delayed the matter on Nov. 3 for further discussion.

Chauke said discussions with parties would continue Wednesday before the bill was completed on Friday. If approved by the committee, the bill will go to the full parliament.

South Africa would be the first African nation to recognize the equality of gay couples on a continent where homosexuality is taboo.

Conservatives and traditional leaders have said the proposed legislation would undermine South Africa's cultural traditions. Many lawmakers of the ruling African National Congress say they have deep reservations about the bill, reports AP.

Gay activists and human rights advocates say the bill does not go far enough because lesbian and gay couples would continue to be barred from full marriage. The proposal defines "civil unions" as the "voluntary union between two adult persons of the same sex to the exclusion, while it lasts, of all others."