India's army chief has ordered an investigation into several cases of soldiers turning their weapons on their colleagues in India's insurgency-wracked portion of Kashmir, officials said Thursday. 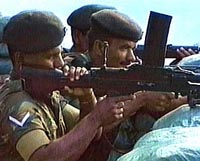 In the past 10 days there have been at least four cases of distraught soldiers in Kashmir fatally shooting colleagues, then committing suicide.

Gen. J.J. Singh, the army chief, ordered the probe Wednesday after the latest incident, in which an army soldier shot and killed his unit commander one day earlier, said an army spokesman, Vijay Joshi.

"The inquiry will go into the circumstances which led to the shooting" in Srinagar, the summer capital of India's Jammu-Kashmir state, Joshi said.

Certainly some of this is about simple opportunity: soldiers have ready access to dangerous weapons. But military officials say 17 years of bloody insurgencies in Kashmir, and to a lesser degree in India's remote northeast, are taking their toll on soldiers.

During this year's Hindu festival of Diwali, when most Indians feast with their families, a soldier in Kashmir shot dead four others, then killed himself with his AK-47 assault rifle.

The army gave no reason for the shooting, but news reports said the soldier had been refused leave to visit his family over the holiday, reports AP.

More than a dozen Islamic militant groups have been fighting Indian security forces since 1989 in Muslim-majority Kashmir, seeking the Himalayan territory's independence from predominantly Hindu India or its merger with mostly Muslim Pakistan. Both countries claim of all of Kashmir, which is divided between them.

India has an estimated 700,000 soldiers in Kashmir, many along the frontier with Pakistan, but plenty more in dangerous, violence-savaged towns and villages. In many areas, the region has the feel of an occupied country, with soldiers in full combat gear patrolling streets and frisking civilians at checkpoints. Kashmiri civilians make little secret of their anger at the Indian military, which is regularly accused of human rights violations.