Kerry apologizes for remark about troops after pressure from Democrats, Reublicans

Fearful of damaging his own party in next week's congressional elections, Democratic Sen. John Kerry apologized to "any service member, family member or American who was offended" by remarks deemed by Republicans and Democrats alike to be insulting to U.S. forces in Iraq. 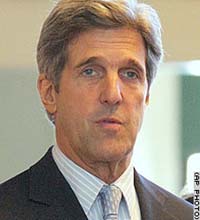 Kerry apologizes for remark about troops after pressure from Democrats, Reublicans

Five days before nationwide elections, the 2004 Democratic presidential nominee said he sincerely regretted that his words were "misinterpreted to imply anything negative about those in uniform."

In a brief statement, Kerry, a Vietnam war veteran, attacked President George W. Bush for a "failed security policy." Yet his apology, issued after prominent Democrats had urged him to cancel public appearances, was designed to quell a controversy that party leaders feared would stall their drive for big gains on Nov. 7.

Kerry, who is not up for re-election, beat a gradual retreat from the national campaign spotlight. Earlier in the day, appearing on a radio program, he said he was "sorry about a botched joke" about Bush. He heaped praise on the troops, adamantly accused Republicans of twisting his words and said it was Bush and his aides who "owe America an apology for this disaster in Iraq."

Democrats cringed, though, at the prospect of Kerry becoming the face of the party for the second consecutive national campaign. "No one wants to have the 2004 election replayed," said Democratic Sen. Hillary Rodham Clinton.

For the Democratic senatorial committee, that meant pumping about $1 million (Ђ780,000) into an Arizona race long thought out of reach. For the counterpart Republican committee, it meant a foray into Maryland, also viewed as an unlikely state to pick up a seat.

A congressional candidate in Iowa said swiftly he no longer wanted him to appear at a scheduled rally. Kerry abandoned plans to attend events in Minnesota and Pennsylvania. "Whatever the intent, Senator Kerry was wrong to say what he said. He needs to apologize to our troops," said Democratic Congressman Harold Ford Jr., locked in a close Senate race in Tennessee.

"It was a real dumb thing to say. He should say sorry," added Claire McCaskill, the Democrat in an equally tight Senate campaign in Missouri, reports AP.

The White House accepted Kerry's statement as a legitimate apology.

"Senator Kerry's apology to the troops for his insulting comments came late but it was the right thing to do," White House deputy press secretary Dana Perino said.