A 37-year-old appliance merchant topped a list of China's richest businesspeople released Thursday by the business magazine Forbes, leading a group of young entrepreneurs who have profited from the country's economic boom. 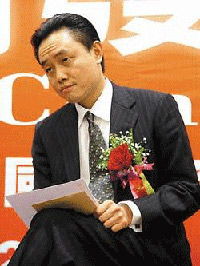 Wong Kwong-yu, founder of Gome Appliances, saw his wealth expand to US$2.3 billion (Ђ1.8 billion), driven by a jump in homebuying by China's newly prosperous middle class, according to Forbes.

The release of the 400-person Forbes China Rich List comes at a time when some of China's richest businesspeople are ensnared in scandals. A real estate tycoon ranked 16th on last year's list was arrested last month in a corruption investigation.

One quarter of those on this year's list are under age 40, reflecting the fact that most of China's fortunes have been made in the past decade as retail, Internet and real estate companies sprang up to serve a booming consumer market.

A Chinese business magazine, Caijing, reported this week that Wong was under investigation for illegal loans. Trading of Gome shares in Hong Kong was suspended Tuesday following the report but later resumed, and the company said it had received no notice of such an investigation. Wong's name also is spelled Huang Guangyu.

No. 2 on the list was property developer Xu Rongnao, with a fortune of US$2.1 billion (Ђ1.65 billion), followed by Larry Yung, chairman of conglomerate Citic Pacific, with US$2 billion (Ђ1.6 billion). Yung, also known as Rong Zhijian, was No. 1 last year.

The richest woman was No. 5 Zhang Yin, who built a paper-recycling business into Nine Dragons Paper Co., China's biggest maker of paperboard for packaging, at US$1.5 billion (Ђ1.18 billion).

Zhang was No. 1 on a competing list of China's richest released Oct. 11 by journalist Rupert Hoogewerf, who used to compile Forbes' rankings.

Flannery said Forbes calculated Zhang's wealth separately from the stakes that her husband and brother own in Nine Dragons. If their holdings were added together, the family would be No. 1 on the Forbes list.

The magazine noted that No. 16 on last year's list, Shanghai developer Zhang Rongkun, was dropped this year after he was arrested in a corruption investigation and his company's share price plunged.

The Shanghai Communist Party secretary has been dismissed in the scandal over allegations that government pension funds were improperly invested in real estate. Other officials are being questioned.

Also this week, state media reported that the multimillionaire founder of a company in the southern province of Guangdong that makes industrial coatings was detained on charges of evading 6.5 million yuan (US$800,000; Ђ650,000) in taxes. Zhang Weibin was No. 438 on Hoogewerf's list but didn't appear on the Forbes rankings, reports AP.

Forbes noted that the average age of businesspeople on its China list was 46.5, compared with 65.7 for the comparable U.S. list.

China's top 40 richest include six women, compared with seven in the U.S. top 40, but the Chinese include self-made millionaires such as Zhang, while the American women inherited their wealth, Forbes said.