Police flood Indonesian city ahead of visit by U.S. president

Thousands of security forces have been deployed to secure a city on the outskirts of the Indonesian capital where President George W. Bush will meet his counterpart later this month, a police official said Thursday. 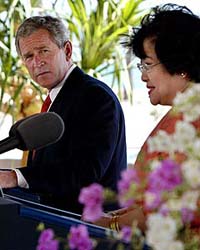 Police flood Indonesian city ahead of visit by U.S. president

Bush will hold talks with President Susilo Bambang Yudhoyono on Nov. 20, after attending an Asia-Pacific Economic meeting in Vietnam, where he will meet Southeast Asian leaders.

Police Lt. Col. Dade Ahmad said police officers, many of them undercover, are already guarding major roads, landmarks and the Presidential Palace in Bogor, around 60 kilometers (40 miles) south of the capital, Jakarta.

Indonesia the world's most populous Muslim nation with 220 million people, including 190 million Muslims has been hit by a string of suicide bombings targeting Western interests since 2002. It has arrested hundreds of Islamic militants in recent years and is seen as a close ally in Washington's war on terror.

But anti-American sentiment in the country rose sharply after the U.S.-led invasions of Afghanistan and Iraq, and many see the U.S. war on terrorism as being directed against Muslims, reports AP.

Indonesia has offered to mediate between the Islamic world and Western nations in sensitive political issues such as North Korea and Iran's nuclear programs and Middle East peace.