Mikhail Saakashvili, the president of Georgia, compared the recent actions taken by the Russian authorities against Georgians to tsarist decrees of the 18th century, when Jews were ordered to be expelled and deprived of property rights. 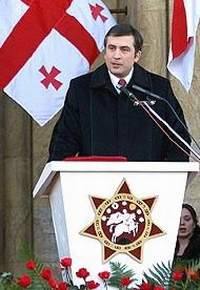 Saakashvili released such a statement at an energy industry conference in Haifa University, The Haaretz newspaper wrote. The President of Georgia was talking about the recent aggravation of relations between Moscow and Tbilisi and compared Georgia to Israel.

“I know what it is to try to build your own nation when danger is knocking on the door,” said he. The Georgian leader also said that two oil pipelines and one gas pipeline going across Georgia symbolize the country’s links with the West. Saakashvili called upon the Israeli administration to invest in Georgia which has extensive business opportunities.

Russian policies singling out Georgians for discrimination and deportation were reminiscent of czarist policies dispossessing Jews, Saakashvili charged, and were one of the reasons that "Georgians and Jews understand each other on a visceral level," the AP reports.

Saakashvili, whose country is embroiled in a feud with Russia over Russia's support for secessionists in two Georgian regions, was to meet with Israeli Prime Minister Ehud Olmert and other officials during his three-day visit.