The White House pressed Sen. John Kerry Wednesday to apologize for a comment Republicans say was disrespectful of U.S. fighting forces in Iraq, saying he "put gasoline on the fire" of an already sizzling midterm election campaign. 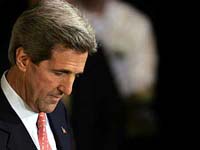 "We're not the one who whipped this up into a big issue. Sen. Kerry did so yesterday," said Snow, appearing the day after President George W. Bush and Kerry traded their harshest accusations since the 2004 presidential race. Bush accused the Massachusetts Democrat of troop-bashing and Kerry called the president's men hacks who are "willing to lie" to gloss over problems with the war policy.

The fiery exchange evoked memories of 2004, injecting more adrenaline into what has been a taut midterm election fight between Republicans trying to cling to control of Congress and Democrats striving to win it back.

What triggered it was Kerry's comment, to a group of California students on Monday, that people unable to succeed in the U.S. educational system would likely "get stuck in Iraq."

As Republicans demanded that Kerry apologize, a Democratic congressional candidate in a close race in Iowa canceled a campaign event with Kerry, saying the senator's comments were inappropriate. And Kerry canceled an appearance for a Democratic candidate in Minnesota, reports AP.

Bush, campaigning in Georgia, said Kerry's statement was "insulting and it is shameful."

Kerry, who is considering another run for the White House in 2008, told a hastily called news conference, "I apologize to no one for my criticism of the president and of his broken policy."

But he also said the comment was "a botched joke about the president and the president's people, not about the troops ... and they know that's what I was talking about."