Mexico's Day of the Dead celebration overshadowed by Oaxaca conflict

Tourists normally flock to the cemetery in Xoxocotlan during Mexico's annual Day of the Dead celebrations to see graves decorated with patterned tapestries of flower petals or brightly colored sand. 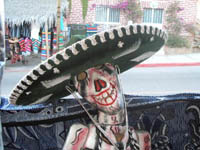 Mexico's Day of the Dead celebration overshadowed by Oaxaca conflict

But this year, only a handful of tourists showed up to the cemetery brightened by flickering candles on the outskirts of the state capital, Oaxaca, in southern Mexico.

Most were scared away by a five-month-long seizure of Oaxaca by protesters demanding the ouster of the state governor. The violence has killed at least 8 people and led the U.S. embassy to warn Americans against traveling to the state.

Federal police raided Oaxaca to retake the city, but at least one federal official acknowledge authorities still do not have the capital completely under control.

"Our celebration is very sad this year, it doesn't have that happy feeling," said Xoxocotlan resident Jose Calido Cruz, 67, as he sat on a plastic chair beside the candle-bedecked grave of his parents late Tuesday. "A year ago, there were a lot of tourists here."

Nearby, a group of young men strummed guitars and softly sang ballads beside a relative's grave. Stands offered "bread of the dead" buns, reports AP.

"This year the cemetery looks about the same as every year, unlike the rest of the city, and we're really thrilled to be here," said tour guide Nancy Zaslavsky of Los Angeles, California.

But this year, Zaslavsky was one of the few guides leading visitors through the cemetery, where in past years residents said as many as five busloads would arrive. Zaslavsky had about a half dozen people in her group.