Israel's defense minister said that a dormant Saudi initiative for Mideast peace could be a "basis for negotiation," indicating a new possibility for talks with the Palestinians after years of stalemate. 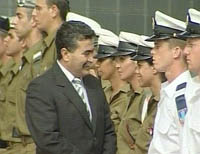 The Saudi plan calls for a comprehensive peace between Israel and the Arab world, based on a complete Israeli withdrawal from lands it captured in the 1967 Mideast war the West Bank, Gaza Strip, east Jerusalem and Golan Heights.

Israeli Defense Minister Amir Peretz said he was not endorsing the plan. But he was the most senior Israeli official even to publicly consider it.

Palestinians hospital officials said the wounded included a woman and an 11-year-old boy. The others were almost all armed militants, they added. Fourteen Palestinian militant groups took responsibility for attacking Israeli troops.

The army said its troops were still operating in the town of Beit Hanoun, in the latest phase in a 4-month-old-offensive in the area. The army said 300 rockets have been fired from Beit Hanoun at Israel since the beginning of the year.