Cambodian activist who rescues sex slaves is honored in U.S.

A Cambodian human rights activist who has dedicated her life to rescuing women and girls from sexual slavery said she hopes that being honored as one of Glamour magazine's women of the year will help draw attention to her cause. 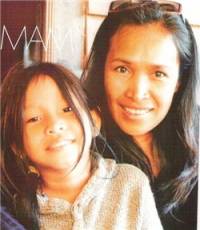 Cambodian activist who rescues sex slaves is honored in U.S.

"We can help 10, but maybe 20 or 30 women they sell again to the brothel," Somaly Mam, president of AFESIP, the French acronym for Acting for Women in Distressing Situations, said Monday. "I want to stop trafficking. If we want to stop we need international voice to help us."

AFESIP has 155 social workers in Cambodia, Thailand, Laos and Vietnam working to rescue women and girls, some as young as 5, from forced prostitution. Mam says the organization has saved 3,000 women and girls since its founding in 1996.

Mam's compelling story she herself was sold into prostitution before foreigners and aid workers helped her escape the sex trade was told in a September 2006 article in Glamour by Mariane Pearl, a journalist and widow of slain Wall Street Journal reporter Daniel Pearl.

Some of the girls Mam's group rescues die of AIDS or are sold back into prostitution by their families, but others leave the sex trade for good.

"We see the victims and then one or two years later some of them got married," Mam said. "They have the children. They are happy. They have a business."

Mam was honored as one of Glamour's women of the year at a ceremony at Carnegie Hall later Monday.

She was interviewed at a restaurant near the concert hall along with Pearl, who presented her the award, and others from Glamour and AFESIP.

"It's one thing to know theoretically that there is child prostitution and really dire conditions in those brothels, but it was shocking," said Pearl, who visited Mam in Phnom Penh last May. "The girls that Somaly introduced me to are babies. ... They needed an ambassador. They needed someone to say, 'OK, this is what's going on.' She has the courage to say that, and without her there's just no voice."

Mam's schedule in New York also included meeting editors in hopes of publishing a U.S. edition of her autobiography, "The Road to Innocence," which has been published in France and several other countries. And she planned to meet with actress Susan Sarandon for help with fundraising, reports AP.

"I am the only one who knows how is the situation in the brothel," she said. "Sometimes the true thing I cannot speak. I cannot get it out. I just keep it in my mind, in my heart."