The European Union said Monday that Kosovo's future lies with final status talks led by a U.N. envoy, not the new Serbian constitution approved over the weekend which puts the independence-minded province firmly under Belgrade's rule. 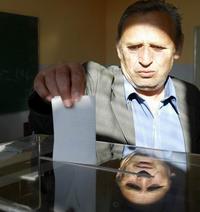 "The issue of the future status of Kosovo is a separate matter" under discussion in negotiations led by U.N. envoy Martti Ahtisaari, said EU spokeswoman Krisztina Nagy. He is expected to make a final status proposal this month.

Nagy said there was a contradiction between those status talks and the new constitution, which refers to Kosovo as an integral part of Serbia.

She also noted that only Serbs voted in the weekend referendum; Kosovo's ethnic Albanian majority was left off the voter lists.

Nagy said the voter list used in the two-day referendum was from 2001 and did not include most of Kosovo's population.

Serbian voters approved a new constitution in a weekend referendum that reasserts the country's claim over breakaway Kosovo, according to partial results released Monday. The charter has irked Western observers and Kosovo officials, as it asserts Serbia's claim to the province, despite ongoing international talks on its future status and demands by its ethnic Albanian majority for independence.

On Nov. 8, the European Commission is to issue a progress report on Serbia's troubled efforts to qualify for possible EU membership, reports AP.

Last month, the chief prosecutor of the Yugoslav war crimes tribunal in The Hague accused Serbia of making no effort to catch Mladic.