Former German Chancellor Gerhard Schroeder recalls his "uncomplicated and natural" relationship with Vladimir Putin in his memoirs, excerpts of which were published Monday, and praises the Russian president's "modesty." 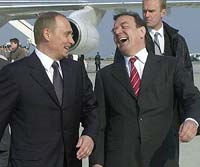 Schroeder, who left office last November, was a close ally of Putin. Critics at home said he failed to push for more democratic change in Russia and balked at the leaders' camaraderie.

"I have rarely experienced a situation in which my wife and I were able to build so quickly an uncomplicated and natural relationship with the family of a leader than with the Putins," Schroeder wrote in his memoirs, extracts from which were printed by the weekly Der Spiegel.

"His modesty is striking. He needs no pomp and displays of splendor," Schroeder wrote in his book, "Decisions: My Life in Politics," which is set for publication later this week.

Schroeder noted that Putin's fluent German a result of his stint in the former East Germany as a KGB officer eased the relationship, and added that, when he first met the Russian leader, he was struck by his "alert intelligence" and "unusual fitness."

"His vision is the reconstruction of Russia as a world power that negotiates, speaks and acts on the same level as the USA," the former chancellor wrote. "He knows that Russia, in order to achieve this aim, must build strategically ever closer-weaved relations with Europe."

Schroeder added that Putin hopes for the support of Europe, and above all Germany, in building those relations "and in this, both countries are acting not only in their own, but also in the European interest."

In an interview accompanying the excerpts' publication, Schroeder was asked if he stood by a much-criticized television appearance in which he agreed with a statement that Putin is a "flawless democrat."

"I have nothing to correct and that also goes for the 'flawless democrat,"' he was quoted as saying, reports AP.

Schroeder's successor as chancellor, Angela Merkel, has brought a somewhat cooler tone to relations with Putin.

Still, she has stood by a major project to build a gas pipeline running directly from Russia to Germany under the Baltic Sea a project that has irked Poland and other countries that will be bypassed. Schroeder drew criticism for taking a job with the consortium after he left office.