Former Virginia governor will not run for president in 2008

Democrat Mark R. Warner, the former governor of Virginia, has decided not to run for president in 2008, Democratic officials said Thursday. 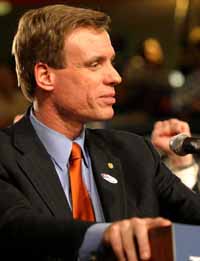 Former Virginia governor will not run for president in 2008

Warner scheduled a late morning news conference in Richmond to make the announcement, according to two Democratic officials who refused to be identified because they did not want to upstage Warner's announcement.

Since Warner left the governor's office in January, he has busily toured key states in the Democratic nomination process, particularly New Hampshire and Iowa. His political action committee, Alexandria-based Forward Together, has raised money for Warner's exploratory effort and for other Democratic candidates in this year's midterm elections.

The reason for Warner's announcement was not immediately known.

The centrist governor who had won in a Republican-leaning state was seen as a viable Democratic alternative to perceived front-runner Sen. Hillary Rodham Clinton of New York. Warner's decision still leaves a crowded field of potential Democratic candidates.

After a difficult start with a Republican-controlled General Assembly, Warner in 2004 brokered a compromise between Democrats, moderate senators and 17 House Republicans to pass a budget-balancing $1.4 billion (Ђ1.1 billion) tax increase. The tax increase was widely regarded as the signature initiative of his four-tear term.

Warner then returned to private business. Virginia does not allow its governor to seek re-election.