Bush said the action "deserves an immediate response" by the UN Security Council." 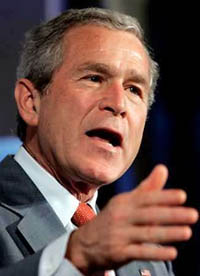 He also he had telephoned the leaders of South Korea, China, Russia and Japan, and all had reaffirmed a commitment to a nuclear-free Korean peninsula.

Bush said, "The transfer of nuclear weapons or materiel by North Korea to states or nonstate entities would be considered a grave threat to the United States."

He said North Korea was "one of the world's leading proliferators" of weapons technology, including transfers to Iran and Syria.

Bush said that in his discussion with other permanent members of the Security Council, "All of us agreed that the proclaimed actions taken by North Korea are unacceptable and deserve an immediate response by the United Nations Security Council."

Added the president: "Threats will not lead to a brighter future for the North Korean people."

Bush said the United States still was attempting to confirm that a nuclear test had taken place. Still, he said, "such a claim itself constitutes a threat to international peace and security."

Bush's comments were in a brief statement he made in the diplomatic reception room of the White House.