UN Security Council votes on next secretary-general; South Korean is likely to win

The U.N. Security Council votes Monday on a successor to Secretary-General Kofi Annan. South Korean Foreign Minister Ban Ki-Moon is virtually certain to be the council's candidate but that is just the first key hurdle. 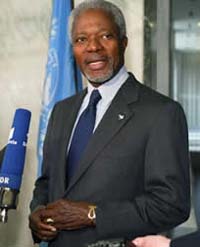 UN Security Council votes on next secretary-general; South Korean is likely to win

Under the U.N. Charter, the 15-member Security Council makes a recommendation for the next secretary-general to the 192-member General Assembly, which must give final approval.

Ban, 62, topped four informal polls in the council, and in the last one he was the only candidate not to get a veto by one of the five permanent council members. After that result, the five other candidates dropped out of the race.

So when council members meet behind closed doors on Monday morning, Ban will be the only candidate on the ballot.

On the eve of the vote, North Korea announced it had conducted a nuclear test.

The timing is certain to increase speculation that North Korea wanted to express its displeasure and opposition to Ban's expected selection as the Security Council's candidate to succeed Annan.

North Korea's announcement on Tuesday that it would conduct a nuclear test in the face of what it claimed was "the U.S. extreme threat of a nuclear war" came a day after Ban topped the fourth informal poll.

In Monday's straw poll, Ban won 14 favorable votes and one expressing no opinion. Most importantly, he won the support of the council's five veto-wielding nations Britain, China, France, Russia and the United States.

If Ban prevails in Monday's formal council vote and is then approved by the General Assembly which is widely expected his selection will have been marked by unprecedented speed, consensus and calm. In years past, the choice of a U.N. chief, including Annan, has often meant rancorous negotiations, numerous ballots and handshake deals.

From the beginning of the search for a new U.N. chief, Security Council members have said they wanted Annan's succesor chosen by the end of October so he or she would have a two-month transition before taking over the secretary-general's job on Jan. 1.

Ban would be the eighth secretary-general in the United Nations' 60-year history, overseeing an organization with some 92,000 peacekeepers around the world and a US$5 billion (Ђ3.9 billion) annual budget. The world body's mandate, however, is much broader than peace and security issues and includes fighting hunger, helping refugees, slowing the spread of HIV/AIDS and promoting education, development and human rights.

U.S. Ambassador John Bolton lobbied unsuccessfully to drop the rotation system and choose the best qualified candidate. He and other council members lamented that there were only seven candidates and that none had served as leader of their country, reports AP.