With Slobodan Milosevic dead and former Bosnian Serb President Radovan Karadzic on the run, the U.N. Yugoslav tribunal in The Hague is preparing to deliver its verdict on the highest-ranking remaining former politician awaiting judgment for alleged genocide in Bosnia. 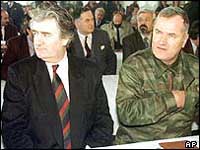 The court will rule on Wednesday in the case of Momcilio Krajisnik, who was speaker of parliament in the breakaway Bosnian Serb Republic during the 1991-1995 Bosnian war, which left more than 200,000 dead on all sides.

Krajisnik, 61, has pleaded not guilty to eight charges, including genocide and plotting to commit genocide by "cleansing" parts of Bosnia of Muslims and Croats to create an ethnically pure "greater Serbia" together with Serbian President Milosevic, Karadzic, and others.

Prosecutors demanded a life sentence for Krajisnik, who they said was one of a troika of Bosnian Serb leaders bearing primary political responsibility for atrocities carried out by their troops from July 1991-December 1992, including civilian slaughters, and murder, torture and rape of detainees. The defense sought acquittal.

The third member of the Bosnian Serb Republic's wartime presidency, Vice President Biljana Plavsic, is serving an 11-year sentence after pleading guilty in a deal with prosecutors.

Plavsic was brought from her Swedish prison cell to testify reluctantly against Krajisnik.

"He was a very powerful man," she told judges in July. "I think in certain matters he even dominated the president of the republic, Karadzic."

Krajisnik testified in his own defense for weeks, arguing that he knew little or nothing of what was happening in Serb-controlled areas of Bosnia.

Milosevic died of a heart attack in March during his trial, leaving historians to decide whether he was pulling the strings from neighboring Serbia during the war, as prosecutors alleged.

The U.N. tribunal is gradually winding down operations, with its final trial to begin by 2008 though it says it will always be ready to reopen if Karadzic or the Bosnian Serb general, Ratko Mladic, are arrested.

Mladic is accused of overseeing the killing of more than 7,000 Muslim boys and men at Srebrenica, Bosnia, in July 2005, Europe's worst civilian massacre since World War II. A fugitive, he is believed to live in Serbia.

"I did not take part in the selection of Mr. Mladic in the least," Krajisnik told the three-judge panel hearing his case, reports AP.

Krajisnik's defense lawyers argued he was a small cog in the machinery of the Bosnian Serb mini-state who was not closely aligned to Karadzic, sought peace early in the conflict and did not advocate targeting people based on their ethnicity.

Before full-scale war broke out in Bosnia, Krajisnik "was genuine, sincere, active and energetic in his pursuit of the peaceful solution," Nicholas Stewart said.

"He knew if there was a war a lot of people would be killed," he said. "There is not the slightest indication Mr. Krajisnik wanted anybody to be killed because of what they were ... or who they were."