It was supposed to be Gordon Brown's big moment: A speech at the Labour Party conference giving the nation and the world a taste of what kind of prime minister he would make. 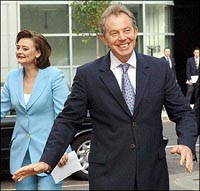 The treasury chief's speech was well received but none of that mattered. The next day, all the country could talk about was what Prime Minister Tony Blair's wife purportedly said about Brown's declaration that he considered it a privilege to work with Blair.

The next day, Britain's leading newspapers chortled with glee, all but turning Brown's speech into an afterthought.

"Cherie in the Brown stuff," read the tabloid Sun's headline. "Cherie derails Brown's message of unity," the Telegraph said. And the Guardian said it was "the remark that wrecked Brown's day."

Blair, offering thanks to his wife and family for their support, made light of the incident in his conference speech on Tuesday.

"At least I don't have to worry about her running off with the bloke next door," Blair said, referring to Brown, his neighbor on Downing Street.

Brown grinned at the jest, but Monday's incident was another bit of bad luck for a man who is much admired for his policy acumen and was long assumed to be Blair's successor, but now seems fated to struggle to attain the prize and may ultimately even watch it slip through his fingers.

The speech was considered the most important of Brown's career, a chance to bury talk about bad blood with Blair and to prove he has the stuff of a leader. He went out of his way to praise Blair and, while acknowledging differences, said they worked well together.

Cherie Blair denied making the comment and Downing Street backed her. Peter Mandelson, the European Union trade commissioner and a close Blair ally, called the feud a "storm in a teacup."

"With all due respect, the media came to this city of Manchester looking for a bust-up, looking for a split between Blair and Brown. They couldn't find it, frankly misrepresented Cherie Blair," Mandelson told Sky News. "I saw Cherie yesterday afternoon, she was, you know, pretty upset by the way she had been misrepresented in this way.

"Does it matter? Is it important? No. Is it a storm in a teacup? Yes, it is. Does life go on? It certainly does."

Cherie Blair is known for being gaffe-prone her unguarded comments on both international and internal politics have caused trouble but she is also a respected human rights lawyer, reports AP.

Political observers don't think it will cause Brown any lasting damage.

"I think he'll be a little bit miffed, because it detracted from the publicity for his speech," said Patrick Dunleavy, a professor of political science at the London School of Economics. "In that sense, it's a distraction. I don't think that it will politically harm the chancellor."