Secretary of State Condoleezza Rice challenged former President Bill Clinton's claim that he did more than many of his conservative critics to pursue al-Qaida, saying in an interview published Tuesday that the Bush administration aggressively pursued the group even before the Sept. 11, 2001, attacks. 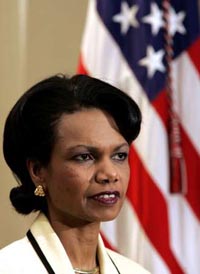 "What we did in the eight months was at least as aggressive as what the Clinton administration did in the preceding years," Rice said during a meeting with editors and reporters at the New York Post.

The newspaper published her comments after Clinton appeared on "Fox News Sunday" in a combative interview in which he defended his handling of the threat posed by Osama bin Laden and said he "worked hard" to have the al-Qaida leader killed.

"That's the difference in me and some, including all of the right-wingers who are attacking me now," Clinton said in the interview. "They ridiculed me for trying. They had eight months to try, they did not try."

"The notion somehow for eight months the Bush administration sat there and didn't do that is just flatly false and I think the 9/11 commission understood that," she said.

Rice also took exception to Clinton's statement that he "left a comprehensive anti-terror strategy" for incoming officials when he left office.

"We were not left a comprehensive strategy to fight al-Qaida," she told the newspaper, which is owned by News Corp., the same company that owns Fox News Channel.

Rice portrayed the departure of former White House anti-terrorism chief Richard A. Clarke differently, saying he "left when he did not become deputy director of homeland security."

The reference to the Cole related to the attack on the USS Cole in 2000.

The interview has been the focus of much attention drawing more than 800,000 views on YouTube and earning the show its best ratings in nearly three years.

Rice questioned the value of the dialogue, reports AP.

"I think this is not a very fruitful discussion," she said. "We've been through it. The 9/11 commission has turned over every rock and we know exactly what they said."