A 59-year-old Thai man who bred and raised fighting cocks in northeastern Thailand contracted the H5N1 bird flu virus and has died, bringing the country's human death toll from the disease to 17, health officials said Tuesday. 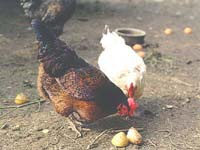 The man, from Nong Bua Lamphu province, had been treating his sick fighting cocks with herbal medicines when he was exposed to the disease, said Thawat Suntrajarn, director-general of the Department of Communicable Disease Control. He became ill on July 14 with fever and aches, and died on Aug. 10, said a statement from the Health Ministry.

"He didn't give his full history to the doctor that he raised chickens, that they were sick, and that they had died," Thawat told The Associated Press. "He was scared that the agriculture officials would kills his birds."

The H5N1 strain of bird flu has killed at least 146 people worldwide since it started ravaging poultry stocks in Asia three years ago, according to the World Health Organization, not including the most recent death in Thailand.

Most human deaths have been traced to direct contact with sick birds, but experts fear the virus could mutate into a form that can easily be passed from human to human, potentially causing a deadly global pandemic.

Indonesia has been the hardest hit nation by the virus with 51 fatalities. The latest victim was a 9-year-old boy, who died Monday from bird flu hours after he was admitted to a hospital in the Indonesian capital Jakarta.

The country also reported another suspected death, while four patients showing symptoms of the virus were being treated in hospitals.

In Thailand, Thawat said he had about 50 fighting cocks on his farm and assumed that since there weren't any bird flu outbreaks in the area near his home, his birds couldn't possibly have died of bird flu.

"His wife finally confessed 14 days after he became sick," Thawat said, adding that officials have gone to the man's farm to cull poultry according to standard protocol.

Cock fighting is hugely popular in Thailand, and owners have resisted previous culls by hiding their expensive birds.

The Health Ministry said Thailand has logged 17 human deaths from the disease.

The man came from the None Sang district of Nong Bua Lamphu, about 420 kilometers (260 miles) northeast of Bangkok.