The producers of "Rang de Basanti" are ecstatic that the Indian film academy submitted their Bollywood hit to be considered for an Oscar nomination, a newspaper reported Tuesday. 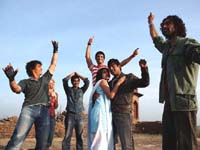 The Film Federation of India announced "Rang de Basanti," or "Paint it Yellow," was submitted in the Best Foreign Film Category late Monday.

"We are all very, very happy," Ronnie Screwvala, the head of UTV which produced the movie, told DNA newspaper in an interview published Tuesday.

"We are going to pull out all stops."

The movie about a group of carefree youths who fight corrupt politicians inspired by the heroes of India's freedom struggle against British colonialists in the 1940s stars Aamir Khan who fronted the last Oscar-nominated Bollywood movie, "Lagaan."

The 2001 blockbuster won widespread attention overseas, but failed to win the Oscar.

"I think Aamir has a lot of experience having been there five years ago with 'Lagaan.' So we are definitely going to use his knowledge," Screwvala told the Mumbai-based newspaper.

Although Bollywood is the world's largest film industry based on the number of films it produces, none of its movies has won an Oscar, reports AP.

Only two other Indian films have been nominated for Oscars "Mother India" in 1957 and "Salaam Bombay" in 1988.