European geologists said Monday it may be impossible to stop a massive surge of hot sludge on Indonesia's densely populated island of Java, saying it could be the birth of a new mud volcano. 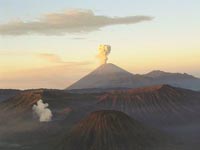 The mud, which runs five meters (16 feet) deep in some places, has submerged houses in four villages since it started spewing from a hole four months ago, displacing more than 10,000 people.

At least 20 factories and 270 hectares (665 acres) of land also have been inundated or abandoned due to safety reasons.

Dr. Grigorii Akhmanov of the Moscow State University said there was no way to know what triggered the mud flow tectonic activity or drilling by the gas exploration company Lapindo Brantas.

In either case, stopping it would be very difficult if not impossible, he said of efforts by Lapindo to halt the eruption by pumping concrete into shafts alongside the hole. "Once you try to stop this, it will appear from some other side," he said.

The mud has repeatedly washed onto a major toll road, closing it for weeks at a time, and now threatens a rail link in the industrial area just outside Surabaya, Indonesia's second-largest city.

Adriano Mazzini from the Physics of Geological Processes Research Center of the University of Oslo said the disaster could be the birth of a new mud volcano providing a unique opportunity for geologists, reports AP.

"Nobody has ever studied a mud volcano from day one," he said, adding that it could die any time or continue to flow for centuries.

In the meantime, the researchers said, the government should explore the potential economic benefits of the mud flow.

The government may be able to tap the mud flow as a source of geothermal energy to produce electricity, as a material for bricks, or for therapeutic skin treatment if the sludge is determined to be nontoxic, they said.