Muslims in the Philippines began observing the fasting month of Ramadan amid concern over stalled peace talks between the government and Islamic separatist rebels and a military offensive against al-Qaida-linked militants. 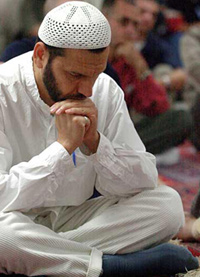 The Islamic holy month started on Sunday, a day later than in some countries in the Middle East. The Muslim calendar is based on lunar observations and can vary from country to country.

A senior Muslim cleric on the main southern island of Mindanao, home to a decades-long Muslim separatist rebellion, said religious leaders were saddened that negotiations between the Moro Islamic Liberation Front and the government hit a snag earlier this month over the question of territory to be included in a future Muslim homeland.

"In our experience of more than three decades, whenever there is war, innocent civilians are directly affected," said Abdulkadir Abdullah. "We urge both parties to be sincere in the talks."

Rebel leader Al Haj Murad has warned that the Malaysian-brokered negotiations could collapse, but the government has vowed to present a new proposal.

On the southern island of Jolo, meanwhile, government troops have continued with a two-month-old offensive against al-Qaida-linked Abu Sayyaf rebels and Indonesian militants from the regional terror group Jemaah Islamiyah, reports AP.

Military officials had earlier ruled out a temporary cease-fire because of Ramadan.

On Monday, armed forces Chief of Staff Gen. Hermogenes Esperon said the military has conducted a dialogue with local leaders in the south and "they understand that the operations must go on ... our religious beliefs must not give way to terrorism."

"We can always celebrate and observe Ramadan even as we go after terrorists, so the operations will go on," he said.

President Gloria Macapagal Arroyo also congratulated Muslims, who make up about 5 percent of the population of 84 million, for embarking on the month of dawn-to-dusk fasting.