Thousands of people came to Australia Zoo today to participate in the public ceremony to bid farewell to Steve Irwin, who died on September 4 when a stingray pierced his chest with its tail. Millions of other people watched the ceremony on television. The public memorial service for 'Crocodile Hunter' Steve Irwin began with an emotional tribute from actor Russell Crowe. 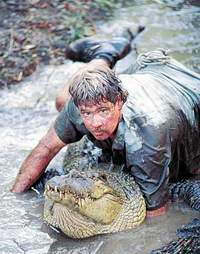 "It was way too soon for all of us," Crowe said in the recorded tribute. "We have lost a friend, a champion. It will take some time to adjust to that."

Australian Prime Minister, among the 5,000 in attendance at the Australia Zoo for the ceremony, was the first to speak at the memorial.

"This is a celebration of terrific life well-lived," Howard said. "For all of us, it is touched with the deepest possible conceivable sadness."

As expected, there was one empty seat at Steve Irwin's personal stadium - the one set aside for the late and hugely popular 'Crocodile Hunter' himself, the AP reports.

Flags on the Sydney Harbor Bridge flew at half-staff, and giant television screens were set up in Irwin's home state of Queensland for people to watch the service.

Three of Australia's main television networks carried the hour-long ceremony, which was to be made available to US and international networks and which family officials said could be watched by as many as 300 million people.

Steve Irwin's father says his daughter-in-law was pleased with the public tribute to her husband, which was held today at Australia Zoo on Queensland's Sunshine Coast.

Bob Irwin says Steve's widow Terri was not ready to speak publicly but was proud of her eight-year-old daughter Bindi for delivering a touching tribute to her father.

Steve’s death set off an unprecedented outpouring of grief. Tens of thousands traveled to the zoo near Brisbane to drop off flowers and other mementoes, many of them signing Irwin-styled khaki shirts instead of a condolence book.

Later, as part of the public memorial entitled "He Changed our World," actress Cameron Diaz (pictures) said in a video presentation that Irwin was incredibly popular in the United States. "America just flipped for him," said Diaz. "Every kid was in love with the idea of being him."

Read more about the tragic death of Steve Irwin on Pravda.ru